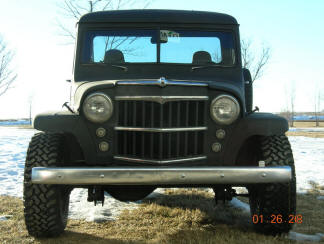 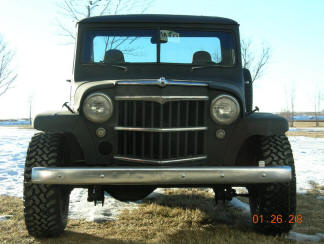 Did some quick photo chopping to see what a widened cab would look like. Also with two sets of lights below the headlights. One set for parkers and the other indicators. The next photo shows with the roof pancaked, or flattened some, to see what it looks like. 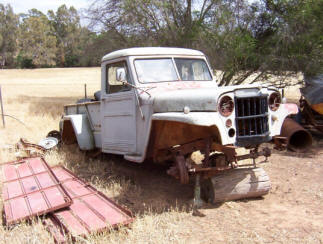 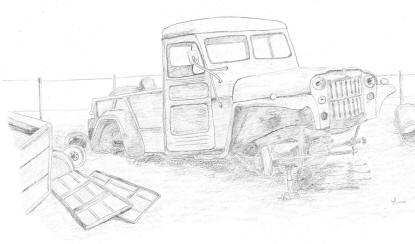 Now on to the actual Willys that will be used. This is how we found it on our pickup morning, still sitting exactly the same since we last laid eyes on it after buying it off eBay 11 months earlier. Also here is my wife's drawing of the photo above. Been teaching herself to draw in the last 12 months or so and this is her first attempt at a vehicle as been mainly animals up until now. Quite good I think and have this framed next to my computer on the wall. 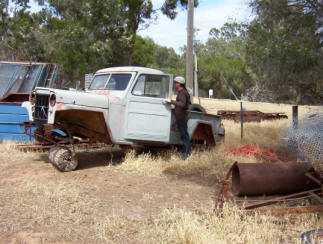 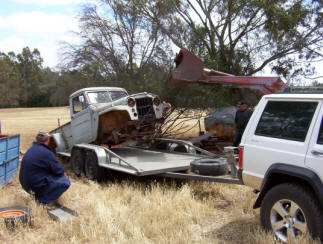 The wife checking the passenger side ( RHD ) cab door which is free of rust remarkably, at least on the surface anyway. ;) To get the Willys, with no wheels, only one hub, and even a spring missing, onto the trailer was a little different to the norm. Got a front end loader to lift the front right up while I backed the Jeep under as far as I could. 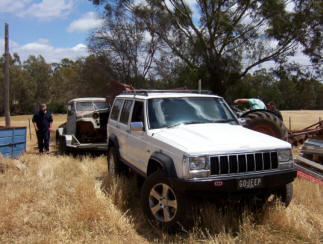 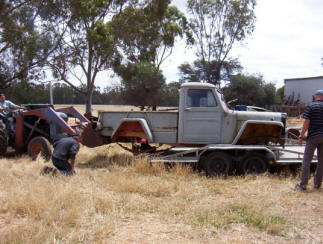 With the bum of it still down and the springs buried in the dirt, I dragged it forward with it attached to the trailer winch so it would not slide back off. At least it is missing the engine and rest of the drive train to make it a little lighter. Got it forward enough to get the loader in from behind to lift and help push it forward while winching it at the same time. The end of the U bolts were digging into the checker plate floor so was not that smooth! 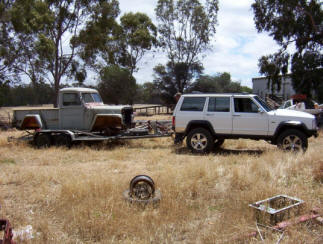 Good to see 35 years of difference in Jeep age together ready for the trip home. ;) Now we have to get it off at home without a loader. I decided to chain the back of the Willys to the house and drive forward pulling it off. My wife's brother came up with an idea of using some pipe under the U bolts which dad thought of as well. Worked well to get it to the end of the trailer. 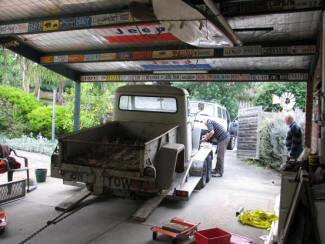 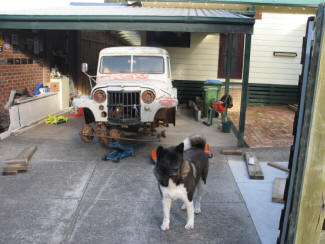 Once at the end, put some timber under the springs to help it slide off. Once the back was down I put the rear axle on some wheel skates. Lifted the front on a trolley jack and drove further forward until the front was about to come off. Did the same with some timber until if could be jacked up and the trailer driven right out and lowered down on to another pair of wheel skates. 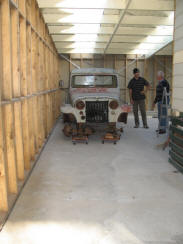 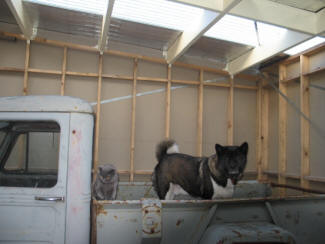 So at long last it is down in the corner of the nearly finished workshop. :) Of course the dog and cat had to check it out! 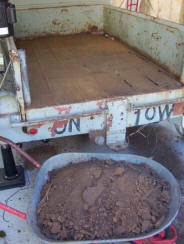 Decided to give it a bit of a clean out. Didn't look too bad before I started I thought. But I didn't even know there was a steel floor under the timber planking! This barrow showed only some of the dirt etc that came out of it! 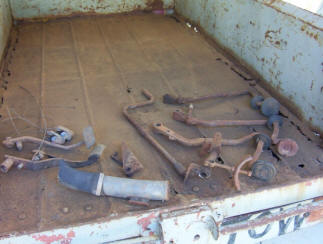 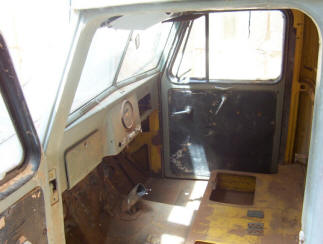 Even found the original under the floor pivot brake and clutch pedals as well as the wiper pivots and crank handle I suspect? The cab floor was pretty good. Only a few small holes with the biggest the size of your pinkie. The firewall is a mess though having been butchered to fit a Ford V8 farmers style at one point. Thinking anyway of replacing it with the donors vehicle one including the floor to get all the brake and seat mounts etc. All depends on how much difference there is in the width after the cab has been widened. Might still not be wide enough. 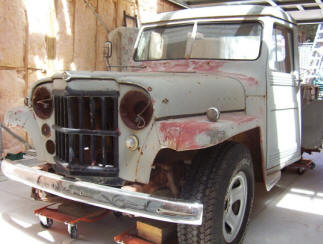 Had to try what the spare tyre from the trailer looked like under it. Not bad at this height but that is a 30" tall tyre and not sure if I will be going that big yet. Dropped on the bumper I imported already from the US over the front of the chassis rails. They normally sit way further forward than this but quite like the look of it like that. It also has 'Willys' pressed into the centre of it as well. Tried the wheel on the back too but that has to come down some. It is only sitting on the wheel skates right now. A quick measurement shows the chassis rising 9"-10" from the low point under the cab. Hope that will be enough kick up to get it lower still? The dog feels right at home in the back already. Pity he wont be around by the time it is finished. :( It also shows the spare wagon grille and bonnet that was inside the cab that I didn't know about until I picked it up! This is the tailgate I brought over from the US as well. I got one from there as it has the 'WO' stamped in the middle for the Willys Overland company. Should look good when I build a new rear bed for it. I have even already bought the licence plates for the Hotrod once it is finished. This was as close as I could get to Willys and was surprised that I could even get these. The slim line will be for the front and the larger for the back. Here we can buy personalized plates and they are ours for life and can assign to any vehicle we own and swap them to another if we sell that vehicle. Can even sell the plates and they can then be used on the buyers vehicle once the paper work has been done.