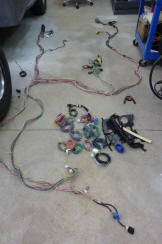 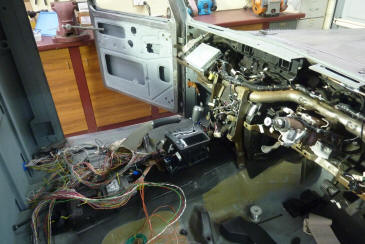 The coiled up wire is some of what I removed. All the wiring for the rear doors, tailgate etc. I also rolled up and bundled all the airbag sensor and bag wiring together. I should have checked to see if the engine would start and drive without the airbag module connected before I started stripping the donor. I have left all the sensors connected and will plug into the module to start with. If it starts and runs I can then just unplug it all and remove it. Hopefully I don't have to plug in all the airbags as well to get it to run! Would have to use simulators in that case. Dash harness all in but still a lot of sorting once things are in their new places. I have for instance put the factory amplifier in the dash where the passenger airbag used to be. The wiring for it used to extend all the way to the back of the Jeep and was mounted under the D pillar trim by the rear hatch. 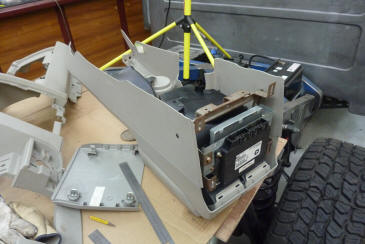 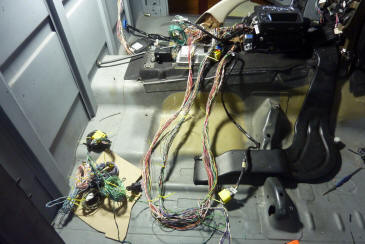 I found a good spot for the park assist and transfercase, (FDCM), modules that were mounted under the back seat. I am mounting them where the rear DVD player went on some optioned up models from mine in the back of the console. Rear cover clips in over it and you won't know it is there. I have shortened and extended harnesses for things as I have them mounted in their final position. Unfortunately that big thick loop of wire is all extra length I don't need! Can't say I am looking forward to cutting one wire at a time and shortening the whole thing. This is extra because the harness used to run down each side of the cabin by the door sills and crossover under the back seat area. I have run it all under the console instead as my door seal is flush with the floor height and it now also doesn't cross over as far back. Tempting to pull the excess back under the dash somewhere and loop it or under the seats on the floor. Another thing that worries me is this is all run on a CAN-bus system with twisted pairs of wires running the data. I don't know if shortening those wires such a great deal will affect the resistance too much and cause errors? I just don't know enough about this and this is all a big learning curve for me. Has cutting out the rear doors and hatch wiring even affected it? If anyone knows more about this, please chime in. 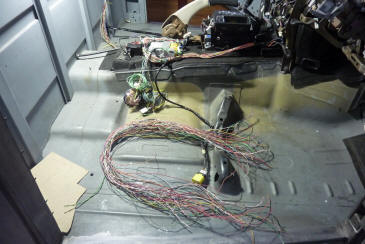 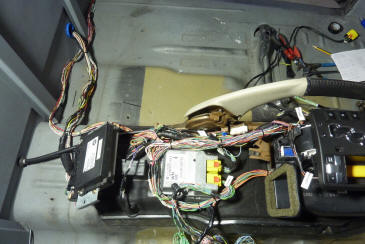 Committed to cutting out the extra length of the loom! In for a penny, in for a pound. The left over coils of wires are the airbag sensors and curtain airbags. I also ran the loom on the other side of the tunnel to keep some separation just in case it affects the EMI. Now to tidy up all the airbag sensor wiring. 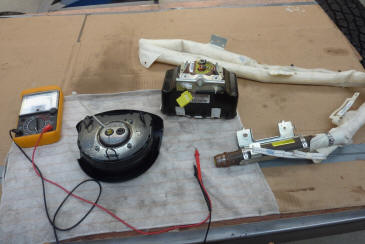 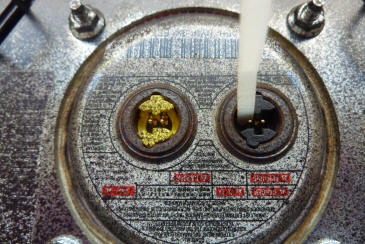 Did some research and the airbag module looks for a resistance to see if the airbags are plugged in or not. This won't stop the Jeep from running, just set off the dash light and a DTC (Data Trouble Code). I need to measure the resistance of the different types of airbags it has in case there is a difference between them. Steering, passenger dash, and two curtain airbags. Later models you need to measure the seat belt pretensioners as well. I have dual stage bags so have to measure both ports. There is a shorting bar that connects both pins as soon as you unplug it. So you have to isolate the bar to get the correct resistance reading. I'm just using the end of a nylon zip tie. You can just make out the copper bar at the bottom of the yellow port. Spring loaded fingers is what they are like. 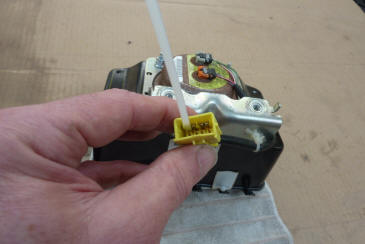 I must admit I was a bit nervous putting the meter probes on the pins having heard rumours of any electrical current setting them off. But saw an airbag company video doing their testing this way so felt better about doing it. This is where I learnt how to check them as well. Both stages showed 2.1 Ohms resistance. The passenger bag even had the plug with the same shorting bar. So did the same trick for both stages. 2.1 Ohms as did the curtain airbags. 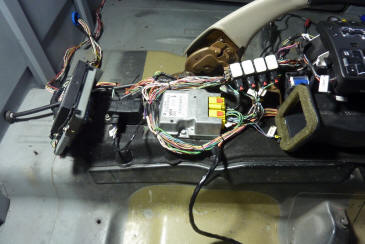 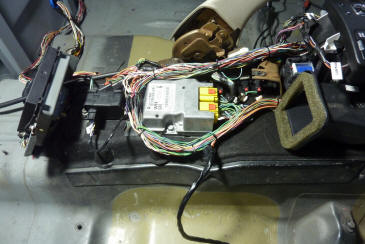 So I shortened all the coils of wire for the sensors and curtain airbags. I bolted the sensors together. I also measured the resistance of the length of wire I cut out and it came to 0.3 Ohms. So the resistance valve I will use in the end of the shortened curtain airbag loom plugs will be 2.4 ohms. I did learn that they have a tolerance of 0.3 Ohms up or down to account for wire length and contact differences etc. I'd rather add the higher value to get it as close as possible to start with. Time will tell as I don't have them yet to try. I have tucked the sensors under the other loom and on top of the padded isolation, as I don't want them bouncing around. 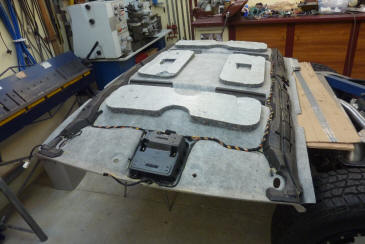 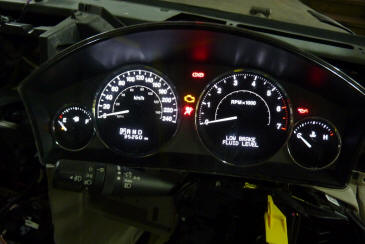 Just when you think you have done most of your looms, the headliner has a big one too! Looked a bit much for just the map and courtesy lights, turns out yet another module up there for the cabin temperature and compass receiver. Think there was an optional DVD player there too? Loom is all sorted and now installed in the Willys. :) And look what happened. I nervously connected the battery and turned the ignition fob, wireless ignition in these, and the dash lit up. Accidently turned too far and it tried to start as well! No fuel in the tank though. Happy days. :) 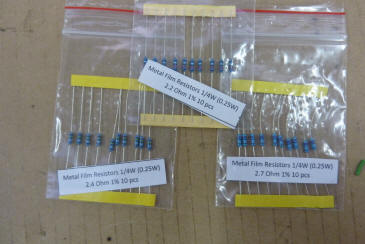 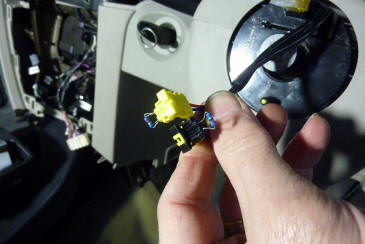 My resistors for the airbags came in. Got 10 packs of three different values in case I need to increase them a bit. Just folded the legs in half and then they were a good fit for the sockets. Tried to see if the airbags light went out and.......it stayed on. So I plugged in all my actual airbags in and tried them without the resistors and it did the same thing. The seat plugs are also wired into the airbag module to detect, and some models, weigh the occupants. In this case there are sensors to detect the position of the seats. Later I plugged in the seats and light went out with the resistors added. 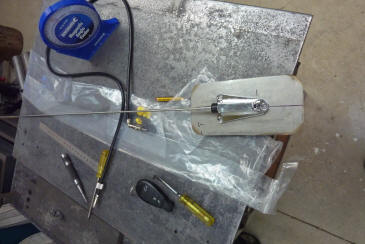 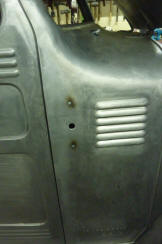 Decided to fit a CJ7 Jeep antenna as the donor one was in the rear quarter glass window. Cut a backing plate for the mount out of some scrap stainless steel. Plug welded the stainless backing plate in so there wont be any flexing of the cowl once the antenna is installed. 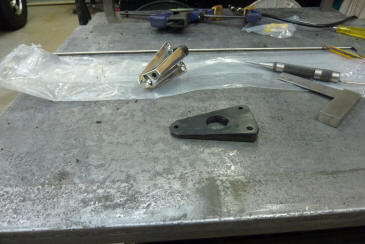 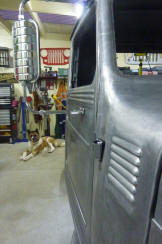 As the cowl is angled, I made a new 3* wedge gasket out of some high density plastic. Just slowly whittled it down on the linisher. I put it on the drivers side as less likely to get trees striking it that way.