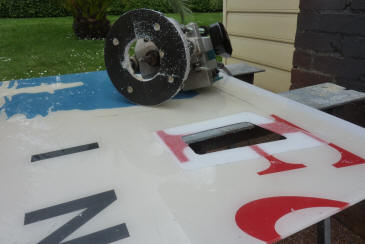 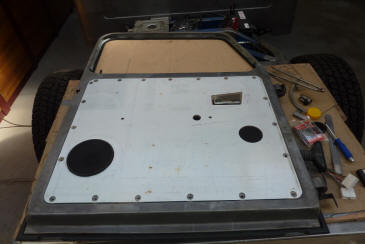 It is made from perspex which is a British name for acrylic. I am routing the area around the door handle so it will sit perfectly flush over it. Can see it sitting nice and flat. Also routed the backside of it around any bolt and screw heads and the speaker mounts. 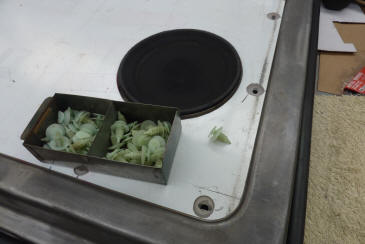 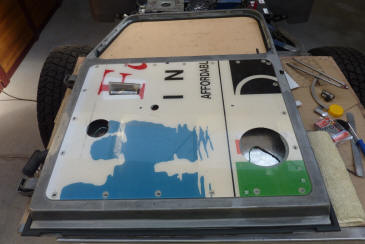 To hold the door panels in place I am using 'christmas trees' from my old XJ Cherokee door cards. I had to recess them a bit as they were designed for a thinner panel. Also means the heads are perfectly flush on this side as will be doing minimal backing on the covering to keep the modern interior theme. Just trying the panel flipped over on the opposite door to see if everything still lines up there, it does, so can use it as a template. If I was going for a more funky theme I could have done it this way! 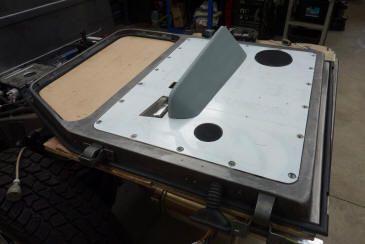 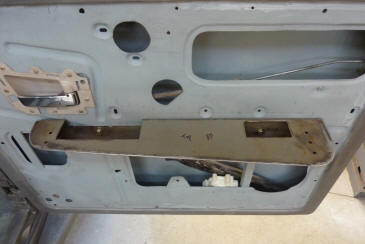 The armrest will break up the panel nicely. Plans at this stage is to cover the armrests in matching dark slate leather as used on the front bucket seats. I will cut it from the rear leather seat covers from the donor. The panel I will match the tan inserts. To bolt the armrest to the door I have installed nutserts in the middle of the stiffening bead that runs across the door. The front bolt I get to through the hole for the switches and cut an access hole out for the rear one. This will all be hidden with another padded covering panel. 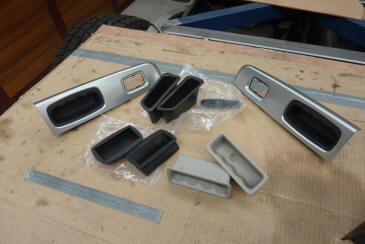 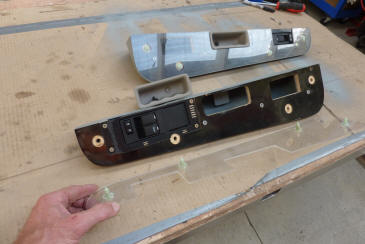 I ordered in some door pocket handles in as well as some I took from another Jeep, KK same as my daily driver. The tan ones are from the donor rear doors. I ended up going with the donor ones and will change the colour of them to black to match the leather. The cover piece I had some I think is polycarbonate. Routed a recess this time for the back of the Christmas trees into the armrests. The door handles are held down by the original screws after I welded in a tab for them. 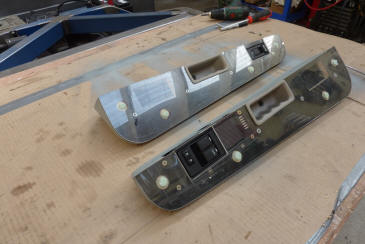 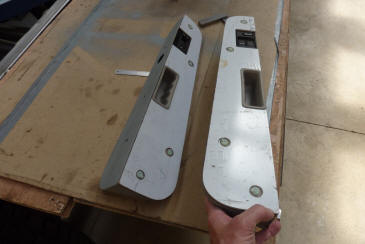 The covers will be padded before being covered in leather. The handle holds down the centre of the cover and the trees the rest. All sits flush on top with no gaps around the side. Only thing I didn't like about the polycarbonate is that you cannot use staples. It just shatters! Not sure how well the glue only would have held on it so replaced them with more of the sign scraps which staples really well. 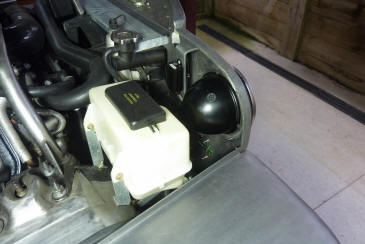 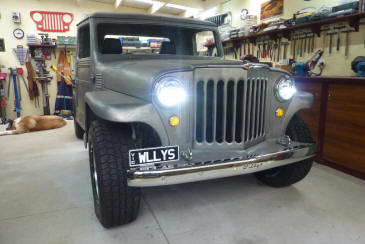 I ran into a problem when I tried the new H4 LED headlights for the first time. They would not change from low to high after converting from the donor twin bulb setup. Fortunately help from good friend at Jeep R Us, Richard Curly, suggested to try a CANBUS Error Cancelation Module, preferably one that works with Jeeps PWM, Pulse Width Modulation, system. I found these from STEDI and it fixed the problem completely. https://www.stedi.com.au/h4-canbus-cancellation-module-for-led-conversion.html I have mounted them to the radiator support as these do generate heat. I wired the DRL, Day Time Running Lights, as my parkers as only use them while driving at dusk, dawn and foggy conditions. Before adding the module they would strobe once turned on, but for some reason that got fixed as well which is a bonus. 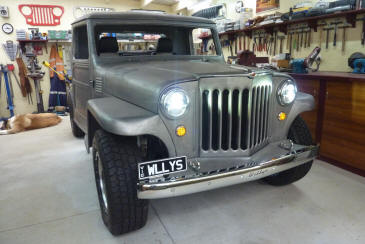 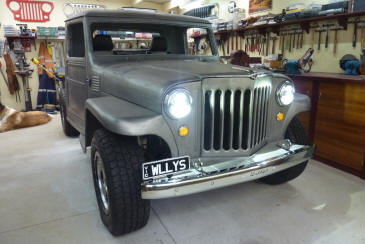 The NARVA inserts use a LED projector for low beam. Notice also that my LED indicators are also glowing dimly which they shouldn't. Adding a 6 Ohm load resistor fixed that. When on high beam the low beams remain on as well. The lights give a very clean cut off so wont blind oncoming drivers. 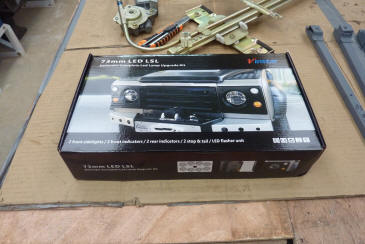 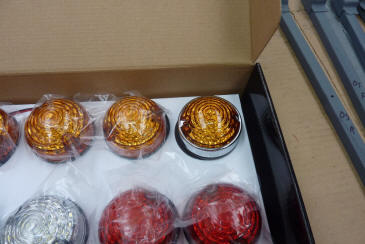 Just got my Defender LED upgrade pack in. I found there were three main versions of these and I chose the NSLUMO brand, although the box says Vinstar, as they had more obvious beehive rings which looked more period and made the LED's less visible. They have the E and SAE codes on the lenses. Can get them on Amazon or eBay. The other two popular brands are WIPAC and RDX. I also imported from the UK some chrome plated brass rings for the more old school look. Bought from Parts for Classic Land Rovers. https://www.ebay.com.au/str/classic-Land-Rover-parts?_trksid=p2047675.l2563 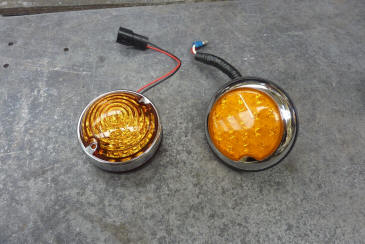 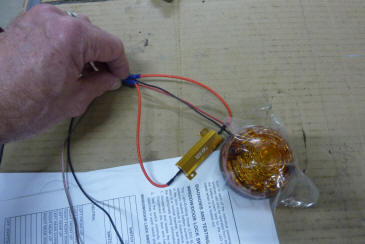 Probably still prefer the chrome ring around the 39 Chevy LED's, but couldn't get matching reversing lights, only stop/tail for the rear set. If anybody in Australia wants the Chevy LED's, will sell them for $70 AUD which is below what it cost me to land them here. The LR upgrade pack came with a LED flasher relay, but the donor Jeep does not run one and uses the Front Control Module to control them. The lights would glow as soon as the computer became active and then would be dim and hyper flash when turned on. I fitted a 50w 6 Ohm load resistor between the positive and negative wires. 4 in total just for the indicators/turn signals as the circuit is split left to right and front to rear. So one for each corner of the vehicle, but didn't need extra for the side ones. 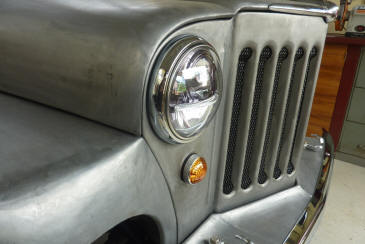 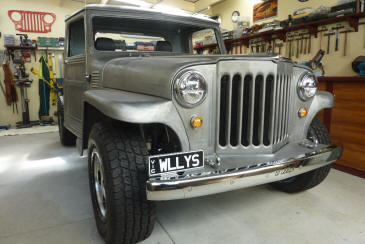 Got a nice classic look to them but with the modern twist I am after. So front lights now all working and finished. I also got the final two chrome parking sensors for the bumper as well.