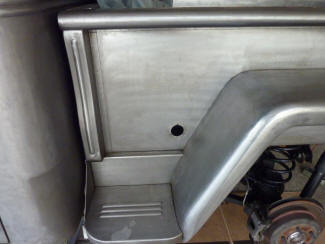 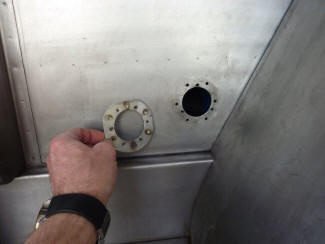 Now I am left with a hole in the side of the bed! So glad I found this out before paint. I had to drill out the spot welds I had used to fit the reinforcement ring behind the hole for the filler neck mounting screws. So now I have 10 holes to fill. 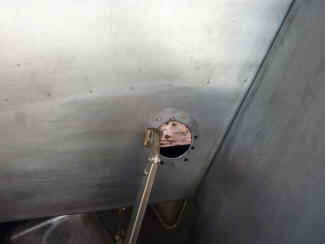 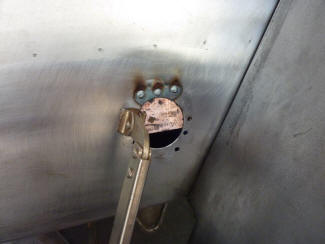 Clamped some copper behind the holes which the weld won't stick too. Also helps draw in heat and means I don't have to grind the backside which is hard to get to. I used a single good hot tack with the mig to fill them. No cooling the weld as don't want to harden the surface making planishing difficult. 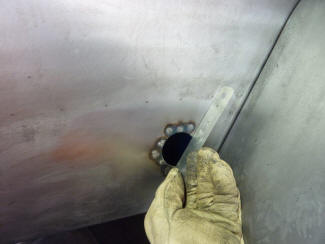 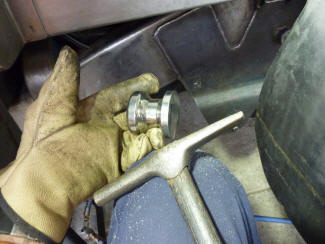 Ground down the welds to a razor blade thickness proud of the surface. This gives me a little extra to flatten hammer on dolly to stretch the welds after shrinking from the heat/cool cycle. Important to get it back flat again before moving on. I am just using this dolly on the small crown side and this hammer to centre the hits directly over each weld spot. 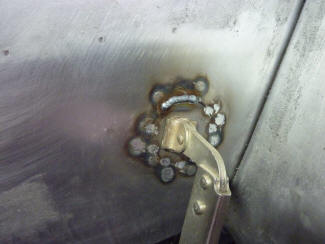 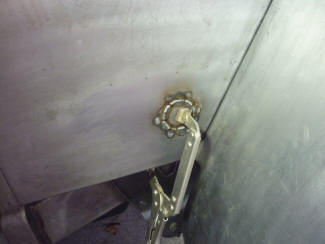 I do this differently to most you see on shows and youtube by tack staking the patch between the ground down tacks. Each new tack is placed while the one before is still orange in colour. If the last tack cools, you must grind it down to almost flush before adding another tack next to it. Never use air or water to cool as it makes the surface brittle. If you tack and quickly cool, you cannot planish the weld for this reason. I still move from one side to the other to tack stack between the tacks holding the patch in place. 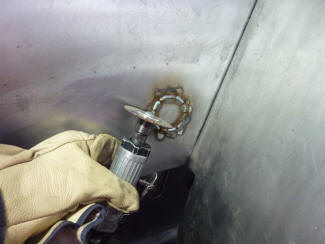 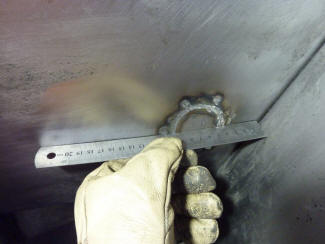 Because space is limited, I am knocking down the weld with what once was a 9" cut-off disc! I used it in my 9" grinder until it was 5" in size. Then use it in my 5" grinder until it is about 2.5" in size. Then it goes on my die grinder. Only use it on its edge like shown and not on its side like a grinding disc. There is a bit of a dip off to the side where it has been welded. I still will not raise that area as I know it was not there before welding up all the holes. It tells me more stretch is needed at the weld site 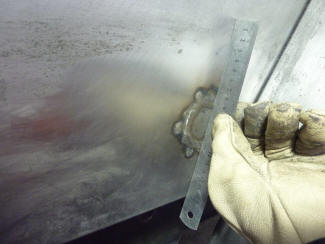 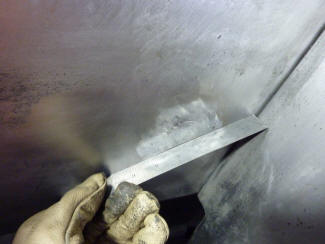 Keep checking in all directions and only still hitting where it was welded. If it starts to actually get worse, you have stretched too far and need to shrink it down a fraction using a shrinking disc. Notice the imperfections left from the welding in the surface. 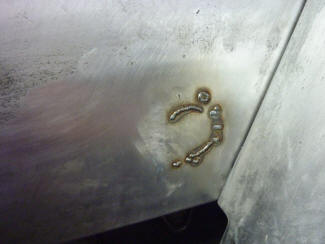 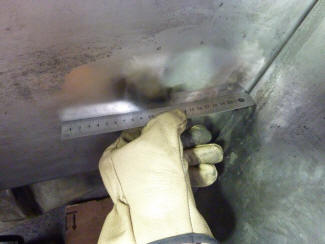 I get rid of them by carefully tacking lightly over the imperfections. This means grinding them down once again and stretching to get back to flat. The very last part of the almost flat ground welds is done with a flap disc and then followed up with a strip disc. 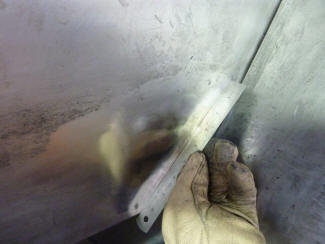 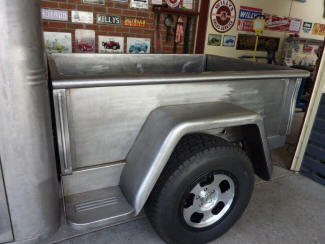 Using the strip disc can also cause a little shrinking as well. Sometimes good to put a little tension in the panel but might need a slight hammer on dolly work as well. Holes be gone! Can barely tell they were ever there now. 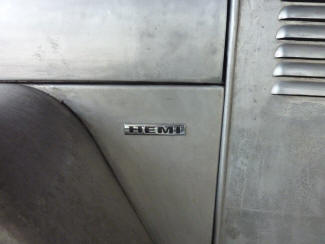 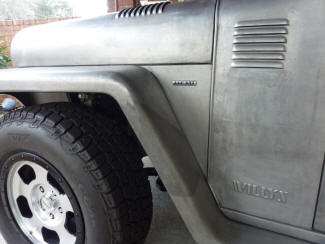 To help slow the, "you got a LS in that?", questions, I added a small HEMI badge. We came up with putting it here on the guard away from the WILLYS pressing as it clashed a bit there and made it a bit busy. Funny thing is that the Chevy guys are even more impressed that it has a HEMI rather than a LS! 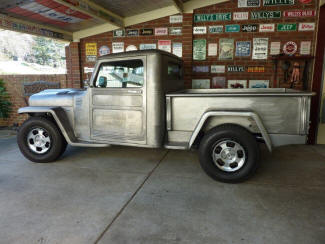 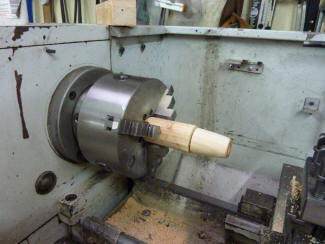 Another thing I did was swap out the stock KK Cherokee rear coils in the rear for some stock WH Grand Cherokee ones the same as the donor. I actually used well worn ones from a wreaking yard as they sat an inch lower than my near original donor ones. The ride is so much better in the rear now and matches the front end. It also added another inch of 'hotrod rake' to it. ;) I had been looking for mirrors that sat out a bit further to help with the wedge shape of the cab, but found nothing I liked more than what I already had. So thought why not widen the ones I already had. First to test the idea I whittled down some 50mm square stock pine and put it in my metal lathe. Used the parting tool to try out some shapes.