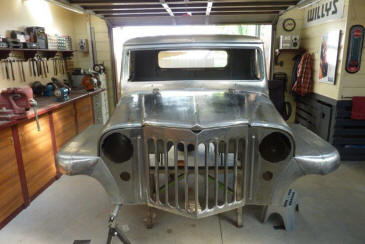 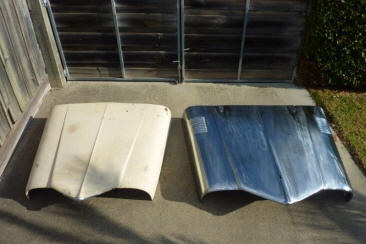 Another piece of the puzzle done and only the other back corner left to do on the skin. Lots more refining of course and you can see the first side is already looking better. If the low spots were loose, i.e. you could lift them with a finger, I use the 5" shrinking disc from underneath to lift them. Tight ones I would use off dolly and lift a low spot next to them at the same time. Sometimes hammering them down into the rubber dolly worked well. A flipper and a dolly pushing up under low spots was needed in some situations. Whatever worked. Bonnet skin is complete! Laid it next to my spare stock one to give you an idea of proportions and size change. I kept the best bonnet to start with in case I needed pieces from it if I failed in making the skin. Might sell the original one now or think it would make a good awning over my garage side door too! 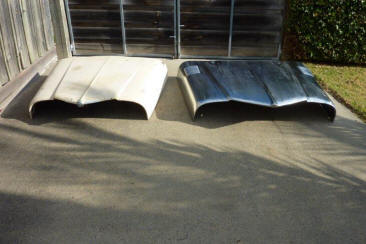 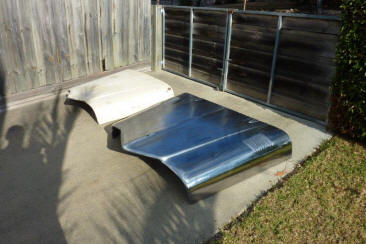 I cleaned the metal surface with a finer strip disc so I could better check the surface for imperfections. This is about as far as I can go until the supports go in to hold its final shape. I don't have any 'loose' areas as is as tighten them up with the shrinking disc even if the shape was already correct. 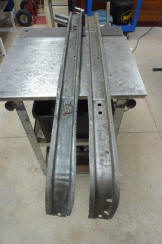 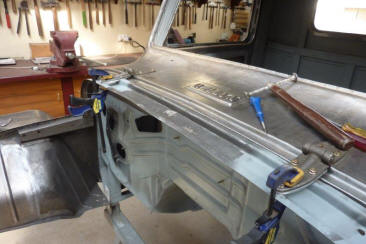 Time to start on the rear bonnet support. I got the two originals I made the bonnet skin from to use. I was very surprised to find how many spot welds went through the outer exposed skin. One had 26 in all! Normally on cars this is never done, especially on large panel such as this, as it shows up through the paint work as the skin expands and contracts with temperature. It will pull on the welds even if it was not visible as time of paint preparation. I will use an adhesive/sealer and spots welds only on the flange at the ends which I will add to these. It will also be held down by the clamping of the hinge screws. I came up with a way to easily make level mounts for the hinges. There was a 4mm difference from one side to the other so made new threaded plates out of some 4mm plate. It is welded in flush on one side and sits up the plate thickness on the other so it stays level under the hinge while the support curves downwards. 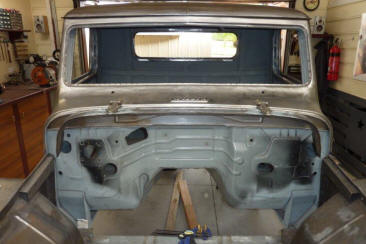 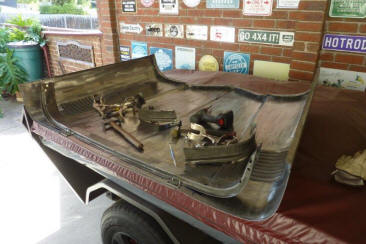 Can really see how much wider the cowl and how different the curvature is. The rise is the same but over a longer distance so it is shallower overall. I will have to alter the support completely from one end to the other to match it. I will hammer right long the bottom edge only, as pictured, to stretch it which will reduce the curvature. With the profile now matching the cowl between the outer bends it is time to measure where to cut and then fit the ends from the other bonnet support to lengthen it. 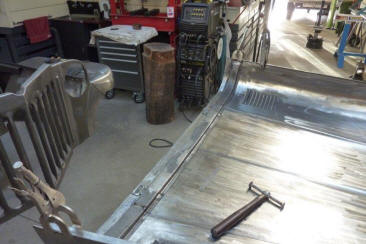 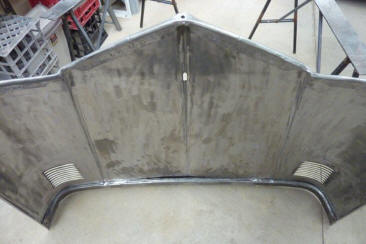 I have only tacked one side of the join so I can make final adjustment once it is bolted to the hinges and matches the cowl. I think it would have been better if I had made the support first and then made the skin match it. I have some excess material left and what is shown is about half of what I started with before using the shrinking disk to reduce it. 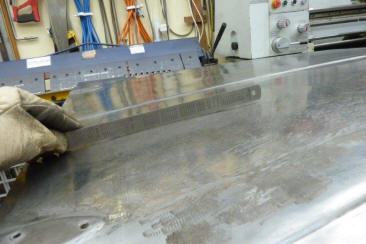 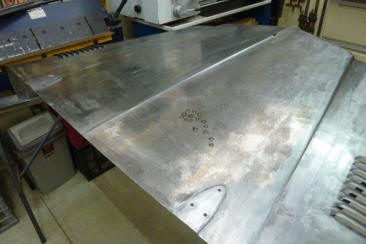 I have shrunk down the skin a lot more over the support but it leaves excess further down the skin as expected. I was having trouble getting this down any further with the shrinking disc. Something I have done for years, but possibly never shown, is I use tacks as a heat shrink. I don't have an oxy and this has more control than my propane torch. Like with the shrinking disc I don't use compressed air or a wet rag to shrink it while hot. The metal stays much more workable this way. 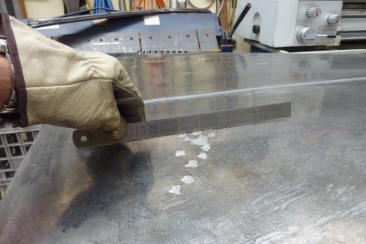 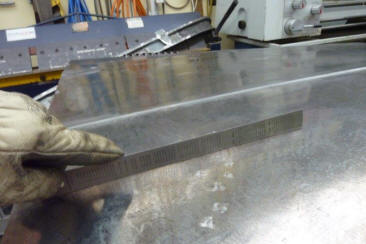 This is what the same spot looks like after only sanding the tacks and then, not before, hammering it down into a rubber dolly so as not to stretch the area. A bit more work with the shrinking disc around the surrounding area and it is nearly there. 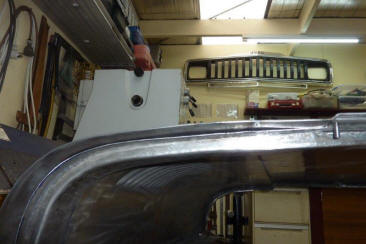 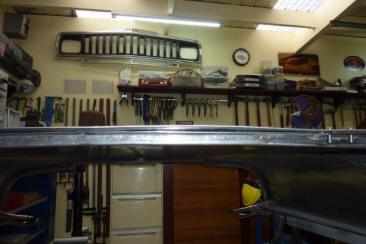 Not far off now and think I will use the same tack technique here. Can see how much closer the centre is as well and hopefully some tacking will get it flush. It will stick out above the cowl edge if I don't get it down flush. 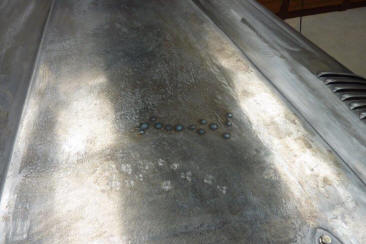 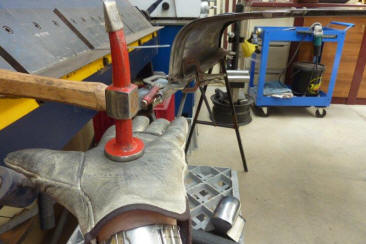 Rather than tacking with the mig like shown before, this time I thought I would try using the tig. I had the pedal adjusted to 50 amp max and mashed the pedal until it just got a gloss to it. Then moved to the next one. Worked even better as didn't have a tack to grind down afterwards. Once it had naturally cooled I hit it with a hammer directly over the heated spot into the flat palm of my hand. The panel actually looks worse straight after heating as it has gathered up metal from around it. So you hit the spots with a sweeping strike in different directions away from it. 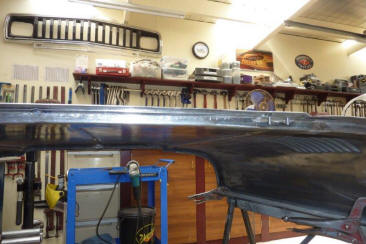 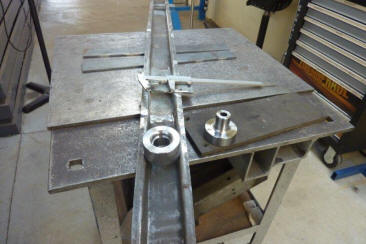 The high spot over the support was also worked the same way and is now gone. The reason this bonnet needed so much shrinking over the whole panel is I actually need less crown than before due to the wider bonnet that rises to the same overall height as before, but over a longer distance. Thought I would add I little more high tech look under the bonnet as will have a modern engine. So going to use dimple die pressings. I tested the 3/4" size which was the largest I could fit inside the support, but didn't like the look. The 1" size shown was too big however.